Here we are on Day 6. Getting this post out a little later since I had some bowling to do earlier.

I am in the Cloverleaf Match club, and we traveled to Dublin bowl today to take on Amador Match Club.

I did good by eating some Chicken and almonds before heading there. Though they did have a nice spread of desserts, I avoided them all, and just stuck to my water. More on Day 6 tomorrow.

Yesterday was another dreary day out. I wasn’t feeling the best when I got up, and really did not want to walk. I did get up and did the dishes, as well as cooked some chicken breasts. Of course, my son came to devour them again. Still, I had extra. I also finished taking the lights off the Christmas tree, and got it out on the curb for pickup.

Then eventually, I did get that walk in.

MyFitnessPal Food Diary.  Under 20 net carbs again. Not many calories, but I don’t recall feeling hungry. So things are working as intended so far. I feel like I am making great strides here so far. I have been steady losing weight, and my morning fasting blood sugar tests are coming in under 100.

Again, I fought it all day. I was just in no mood to go walk. I had all the excuses ready to go. It’s raining, it’s late out, etc. I almost gave in. Then what I’ve called my “fuck it” attitude kicked in. The little beast mode creeping in, and giving me that must do it feelings. Next thing I knew, I was out the door. 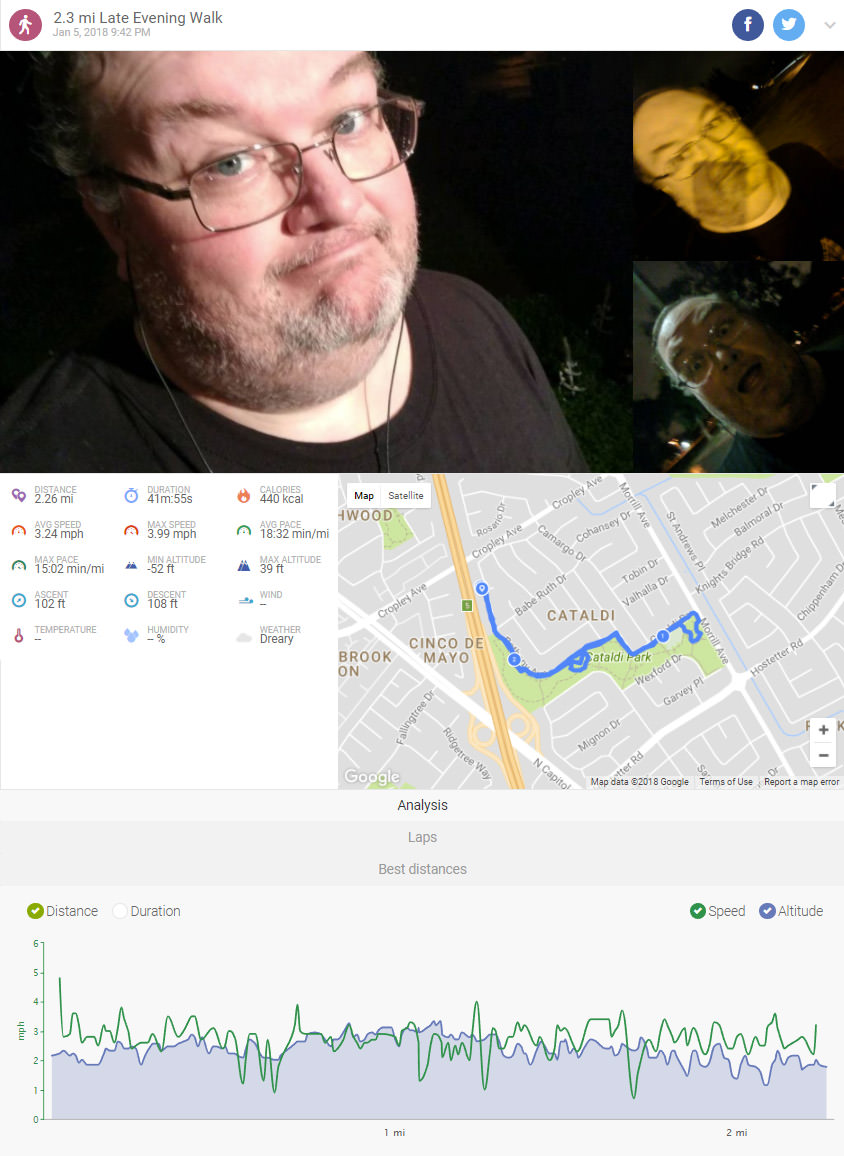 My walk on Endomondo.  2.3 miles, almost 44 minutes. Longer then I originally thought I would do.

While I was out walking, I felt so proud of myself. Just getting out and doing it. I didn’t care that there was some rain, or that it was later at night. I was out walking, and I felt great. The mood was good enough, that I was taking some selfies along the way.

Sleep was a bit weird. I was getting up early to do some things this morning before getting ready for match club. Since I knew this, I went to bed earlier.  Fitbit tracked 12:10 am to 7:29 am. This should have been fine. Unfortunately,  I had a big awake period. Right around 12:40 am, I woke up. Then I rolled around, trying to get back to sleep, for like 38 minutes. I just could not get back to sleep. Eventually I did, but I recalled getting up, slightly, to move into different positions.

My small victory of the day:

Getting my walk in, when my brain tried so hard not to do it. I did it, and felt great while I was out there.