I did blog yesterday about Day 6 a bit. I am getting this post out later at night, and I figured today I would post the weekend wrap up. Tomorrow will be Week 1 summary.

I was up a little early to get things ready for bowling. I bowled in Dublin, Ca against the Amador Match Club. Sometimes the home team provides snacks. It use to be more meals, but Bowling center owners are worried about getting sued. The Amador match club had desserts out. Cookies, cupcakes, and fruit. Normally, I would have ate plenty. Today though, I had none. It isn’t worth it for me to eat all those carbs right now. This was my small victory of the day.

MyFitnessPal Food Diary.   Higher up on Calories at 1897, but under 20 net carbs on the day. We tried out making ribs in the Instant pot. Technically ours isn’t the Instant pot brand, but a Crockpot on instead. Still, electronic pressure cooker. I had my ribs with no BBQ sauce. Didn’t want the extra carbs. I did see some sugar free sauce out there, that I might have to try next time.

None really done. I just didn’t get out there. Bowling and traveling to bowling took up a nice chunk of the day, so I was playing some catch up on other points of interest.

I got up early today, and got my blood work done. I’ve been overdue for it for a couple of months. So small victory today is getting it done. I also got out for a nice walk this evening. One of the reasons this post came late.

MyFitnessPal Food Diary.  1458 calories and 18 net carbs. I got worried a little today. For lunch we decided to eat out. So we went to Jersey Mikes. I got a Sub in a Tub. Basically whatever subsandwich you want in a container instead of bread. I went for the Big Kahuna. It is pretty good, and I have had it before in a tub. Well, I thought it was a lower carb version. Instead it ended up being 15 grams of carbs. So it just made dinner a little lighter for me haha. 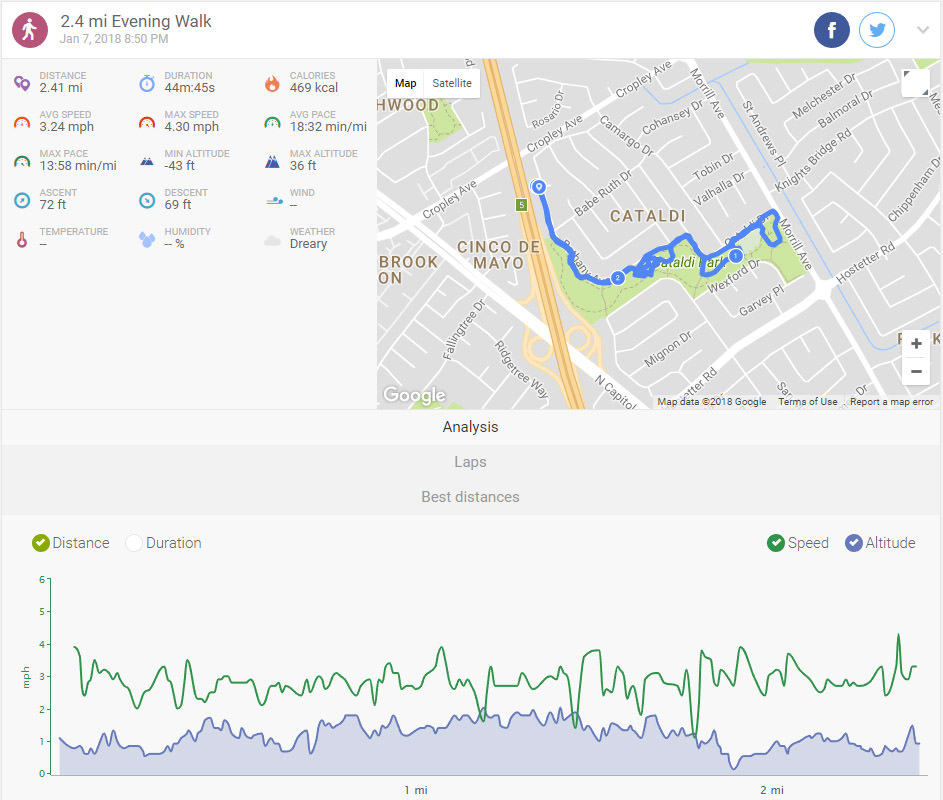 2.4 miles walked. 44 minutes. Not too bad. Even grabbed a few Pokéstops out there while playing Pokémon Go. It was a bit cold, at least for California.

Well Obviously, I haven’t gone to bed yet. Soon though. I plan on continuing my reading in a few minutes. I am making my way through Leviathan Wakes, book 1 of The Expanse series. Then I will be heading to bed. I have somewhat of a busy day tomorrow. I have to hit up Costco for Chicken and Spring mix salad, and you know you have to get to Costco early.