So today, I am going to start off with my Motivational Monday. 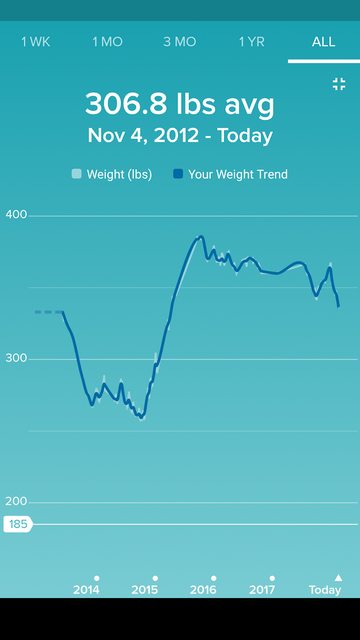 This graph on Fitbit represents my greatest failure.

Now during that incline, I was really messed up mentally. It was more and more failures everyday. Thoughts of “What kind of person does this to them self” Even after I peaked, I was completely embarrassed. I was too embarrassed to even come back here. I was too ashamed of what I had let happen to myself. I wanted to get right back into lose it all mode. I just couldn’t. What seemed to work before, just would not help this time. Where I had the iron will to turn down whatever cookie/candy/donuts or whatever sweets showed up, I could no longer do it. Still, I tried. I did get myself back down a bit into the 360-370 area. But I stayed like that for like 2 years. Late 2017 I got the surgery scare from my doctor. I had a really bad blood test result. It looked like my body couldn’t do it anymore. Hell, I knew that though. Even without blood tests, I knew my body was breaking again.

Even in the worst times, I did come to check out some people’s progress on Nerdfitness. The last year or so, I had also been watching the Keto subreddit. Very inspiring stuff. It wasn’t enough to get me to stick to it, but it was getting me there I think. After my Doctor saying she wanted me to really consider the surgery possibility, I knew I needed change. Like now or never change. At first I started by giving myself a slight timeline. Get things moving in the right direction, or tell the doctor you give in, and do surgery. I started playing with Keto a bit. I wanted to see if I would be able to do it. Things were looking positive. I just wasn’t 100% committed to the process. It was easy enough to join on board with my wife in the “Well, I will just do better after New Years” So that meant I got to “enjoy” my Thanksgiving and Christmas by eating all the things. I noticed that the small positive I had made weeks before, was completely erased with all the bad I was eating.

I was tired of that old me. It was time to bring back the new me. The Healthier me. The one that ran two Spartan races. The me that ran a 5k for the first time in my like. The me, that felt a lot better then the old me. As of today, I am the lightest I have been since April 16th, 2015. That was when I was on the uphill climb.

So while this picture represents my greatest failure of all time. It also will represent my one of my greatest achievements. It will be this year, or next year, or even the year after that. That downward trend will continue. I will beat my previous low weight record of 257 lbs. I will get under 200 lbs. I will be, that healthier, stronger, much more badass version of me.

7 weeks in to the new year. The year I am turning my life around.

Overall, great week with food. I have been able to stay with a 18:6 Intermittent fasting schedule. It is a little tough, and I may switch back to a 16:8 eventually. For now though, It is working fine. 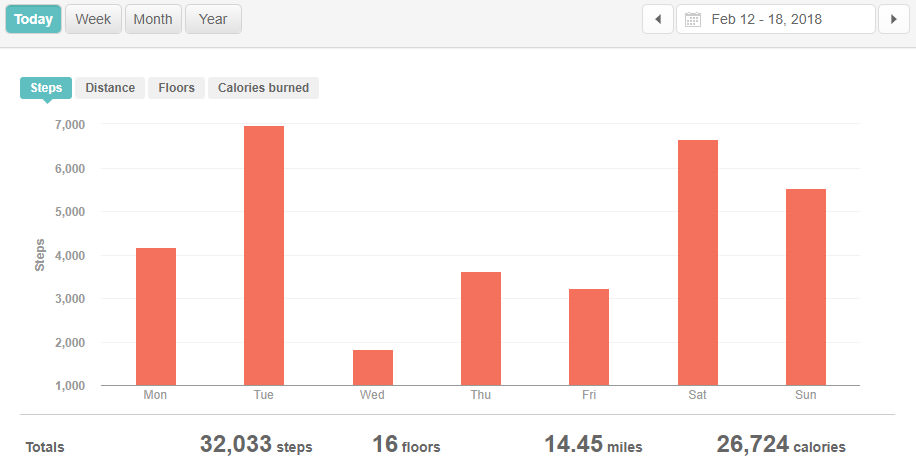 Not my greatest week, but better then last week. I went out 3 times this week to walk. My goal was to get out there 5 times. So room to improve this week.

One night, I didn’t read this week. I did however get to bed at midnight. I didn’t always fall asleep right away. I also had a couple of really bad nights of sleep, which in turn made it easy for me to give up on walks and such.

So this week, we kill it. Not just me, but anyone reading. Remember those New Years Resolutions? If you slipped, you slipped. Time to get back up on try to tackle it again.